One of Burlington's oldest parks, Mosquito Park, located at the corner of Franklin and North 3rd Street, offers scenic views of the Mississippi River. Many wedding ceremonies and photo shoots frequent the area in the summer. In the winter, bird watchers come out to see the eagles flying above the area.

The Mississippi riverfront was the focus of activity in early Burlington. The river traffic (which could dock at the cobblestone steamboat landing) brought a tremendous number of people into the community and provided strong social and commercial links to the eastern part of the United States. Today's visitors to the riverfront can walk along the river from the south boat ramps to the welcoming gazebo at the north end of the park. This park will be linked with the Flint River Trail, which ends at Big Hollow, nearly 20 miles north in Des Moines County.

This 1.7-acre park was established in 1997 in the Saunderson Heights area at the site of the Saunderson Elementary School at Marshall and Valley Streets. The school building at this location was also the home of the Burlington Junior College in 1931 and with its name change to Burlington Community College. By 1972 all programs eventually were moved to West Burlington and is now known as Southeastern Community College. The amenities of the park include an open shelter, picnic tables, playground equipment, and a basketball court.

South Hill Park was the other park that was originally platted within the city limits. By an act of legislature, North Hill and South Hill parks were made "parks for the use of the public" in July 1836. In 1924 the Stars and Stripes Chapter of the DAR dedicated a bronze marker in this park to commemorate the spot where the United States Department of the Navy set their instruments to observe a total eclipse of the sun on August 7, 1869. This park offers an outstanding view of the downtown commercial district and the river beyond.

Located on North Fourth between Court and High Streets, this is one of the two original city parks. This park was the site of the first Methodist church in Iowa founded in 1833. Although the log cabin, which housed the church and the first school in Burlington is no longer standing, the land has been used for a public park since the original platting of the city.

Dedicated to the memory of the first woman mayor of the City of Burlington, the Nancy Neafie Park occupies the corner of Sixth and Jefferson Streets in downtown Burlington. This newest "pocket" park, just one block south of Snake Alley, contains a low limestone wall, boulder of native stone, benches, tables, an attractive walkway, and a space for public art.

The 1.3-acres in this park, adjacent to the 300 block of Angular Street, offer large shade trees, basketball courts, tables, and playground equipment.

Another of Burlington's "pocket" parks, this little (1/2-acre) park, located on Summer Street between Pine and South Streets, includes a picnic table and some playground equipment.

Picnic tables and playground equipment are tucked into this "pocket" park under 1/2 acre located in the 500 block of South Sixth Street. 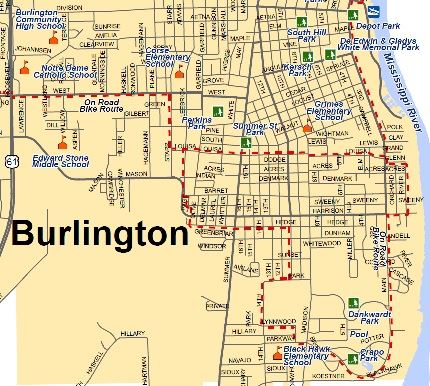